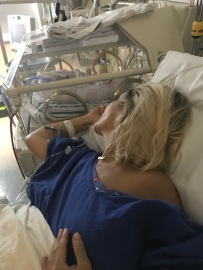 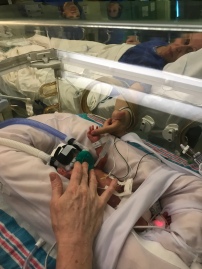 After we delivered I didn’t get to touch my boys.. I didn’t even get to see their faces… they were brought straight to the NICU .. eye masks were put on to shield their sensitive eyes from the lights and small tubes placed in each nostril to help support breathing. When they took me to see them, they were wrapped in blankets .. tubes in their belly buttons (IV) , and with all the masks and tubes on their faces I could only see tiny lips with another tube coming out of their mouth. I didn’t know what they looked like.. i didn’t feel their skin.. but I felt lucky to have at least hear them cry.

I went to bed last night feeling lost. I missed having them inside me.. missed feeling them kick .. they felt so far away .. on a different floor inside a plastic box.. it was a hard night. I missed my girls and my boys.

I needed something to help me feel connected to them. I needed to help them in some way. This morning the Lactation coach came in my room very early. She helped me pump and explained how colostrum is “medicine” for the babies. I was never able to produce a lot, but they only needed a few drops which I was able to do. We went down stairs to see them and I was able to give it to them. It was the first time In a long time that I felt my body doing what it was supposed to do for my babies. I was able to give them something to help them grow and make them strong and healthy. I have been desperate to help them and my body couldn’t do it. Giving them this “medicine” from my body was therapeutic for me as much as it was for them💙. I was also able to “hold ” Maurice by placing my hands on his head and feet.. he is so tiny and his skin so soft.. he was crying and when I touched him and sang to him he stopped. It was the first time I felt his skin. Tears rolled down my cheek .. I was able to soothe him.. my baby boy knew the sound of my voice.. I told him how much I love him over and over. I was able to provide him essential nutrients , my antibodies, and calm him with my touch. It was very special and our first moment to bond. I couldn’t help but keep thinking about how many times I almost lost him.. and now he is here.. my little baby.. my baby b .. baby Maurice is so incredibly strong.

He has been struggling with his kidney function. He stopped producing urine in utero due to tttts. As the “donor” he was unable to profuse his organs and his kidneys stopped working before he was born. The doctors say this is common in babies born with this syndrome but they cannot predict if he will get better. By the end of the day they had to place a catheter to get exact readings of his output and they were able to report some good news! He seemed to be producing urine and although a very very small amount he is not in kidney failure. He is being treated with Dopamine to help the profusion to his organs and we are monitoring his kidney function closely. We are also closely monitoring his heart function as well.. it’s mild to moderately decreased likely due to the stress he had. The nurses are on top of everything and I feel very confident in his care.

Baby Peter gave us a scare today as well. His feet were “dusky.” They took out the catheter in his umbilical artery and it appeared that they improved. The nurse told us it could have been an arterial spasm but they did Doppler’s of legs and repeated his heart echo to be sure. So far we have not heard any other concerning news and because things seem to have gotten better they are not very concerned. Peters nurse let me help in changing his teeny tiny diaper and again just being able to touch him and clean him was such a beautiful bonding moment.

This journey, although only a day long, has felt like an eternity. Being able to comfort them.. even if only with a soft touch through a tiny hole, has made me feel so much love. I am focusing on the positive. Their lungs are so so strong and they have been able to maintain their vital signs. The nurses call them feisty and say that they are always looking for attention. They are fighters. I am so proud to be their mother.