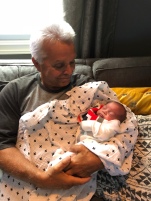 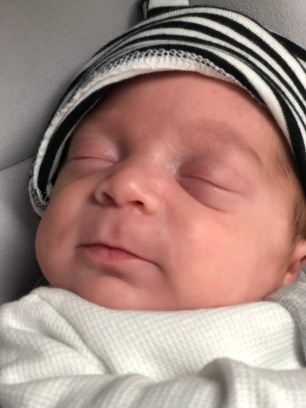 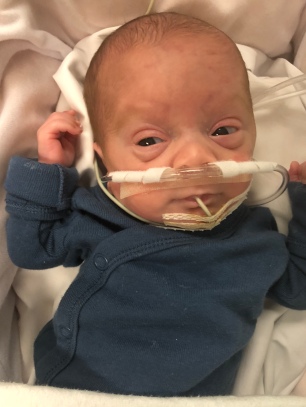 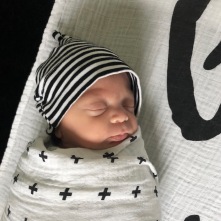 Yesterday I walked in to the NICU and as always my eyes went right for the monitors.  It was so strange to see Peter’s turned around and a big open space where his crib was.  Maurice’s nurse told me he was having difficulty tolerating feedings.  His heart rate dropped and she had to change the rate through the feeding tube to 45 min.  He was not waking up or sucking on his pacifier.  He seemed “out of it.” He was also put back on oxygen because he was having episodes of low oxygen or ”destats.”  I’m concenered.  He has been working so hard to breathe with a respiratory rate averaging double what it should for the past month.  It seems that the doctors on Saturday tried taking him off respiratory support and after only 20 min he had an episode so they had to restart.  It’s not clear why they would have this trial after he was working so hard and his doctor told me Friday they would keep it on.  I was told when they accessed him Saturday morning he must have “seemed ready.”  Well now he’s struggling even more and is tired.  We did a chest X-ray and his lung volume is decreased.  I’m not sure why or exactly what this means.  The answer seems to be over and over it’s just prematurity.  They put him back on high flow with some pressure to help open his lungs and he seems to be doing a little better.  He also had some blood work which showed no signs of anemia, infection or inflammation.  In addition, he had pretty significant diaper rash on Sunday and even little spots of skin breakdown.  I’m not happy.  He gained 120 grams last night which is a huge gain and although it seems like a good thing I’m concerned it’s edema or swelling.  We have been “just watching” his fast breathing for a month.  Now he is not tolerating feeds, his heart rate dropping, oxygen dropping, and not having energy.  In light of his fast breathing for a month .. I wish we would have done a chest x ray sooner and not pushed him so hard this past week.  I also think he’s missing his brother Thankfully he seems more comfortable with the respiratory support.

Peter, on the other hand, rocked his first doctor’s visit today.  He left the NICU 4 days ago weighing 5.9lbs and he is now a whopping 5.14lbs.  He is happy and healthy.  We have to follow up with a few specialists ( cardiology , audiometry, opthomology, developmental dr,  physical therapy) but there are no signficinat problems thank god! He is feeding and growing and changing the shape of my heart every minute of everyday.  We have the owlet at home and it has given us such peace of mind.  It is super easy to use and monitors his heart rate and respiratory rate.  There is also an app we can log into at anytime and see how he is doing.  I don’t think I would have survived without it.  I own a children’s lifestyle store Miagirlxo.  I can offer any mom a discount if needed( email me at miagirlxo@gmail.com for more information) I was also advised that coming next year it will be recognized as a medical device and will be available by prescription.    Learn more about the owlet here.

The NICU is a rollercoaster but when you have twins the ups and downs happen at the same time.  It’s the hardest thing I have ever been through .. but also the most beautiful.  My soul shines brighter because of you my boys.  We wil all be together soon.