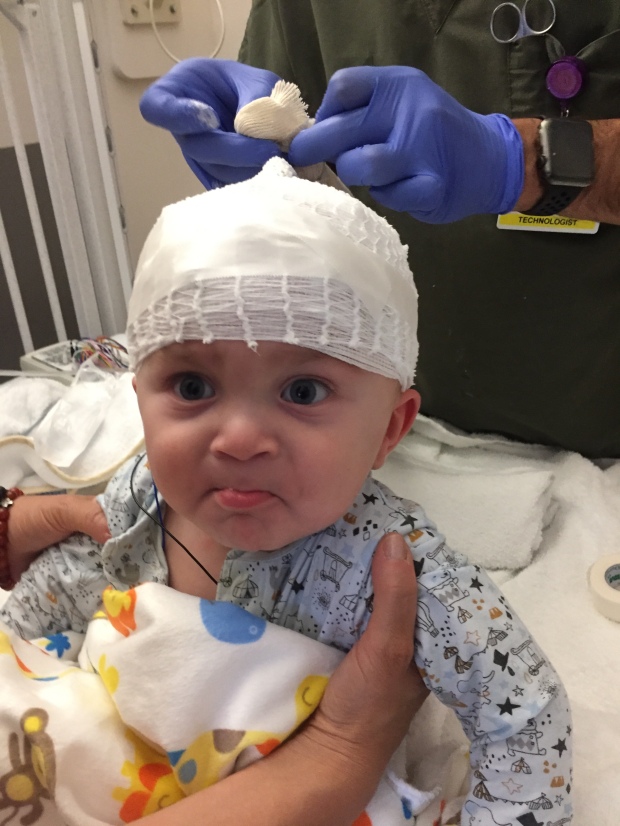 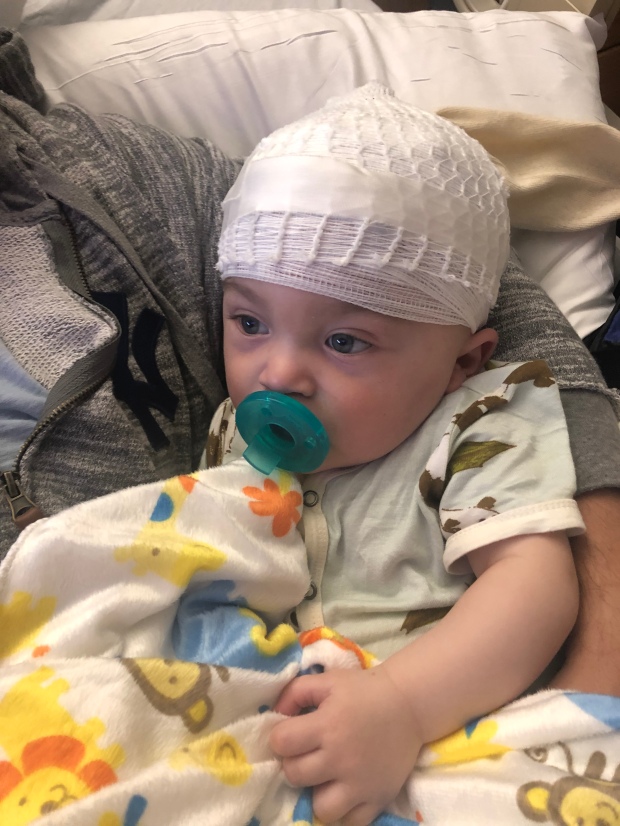 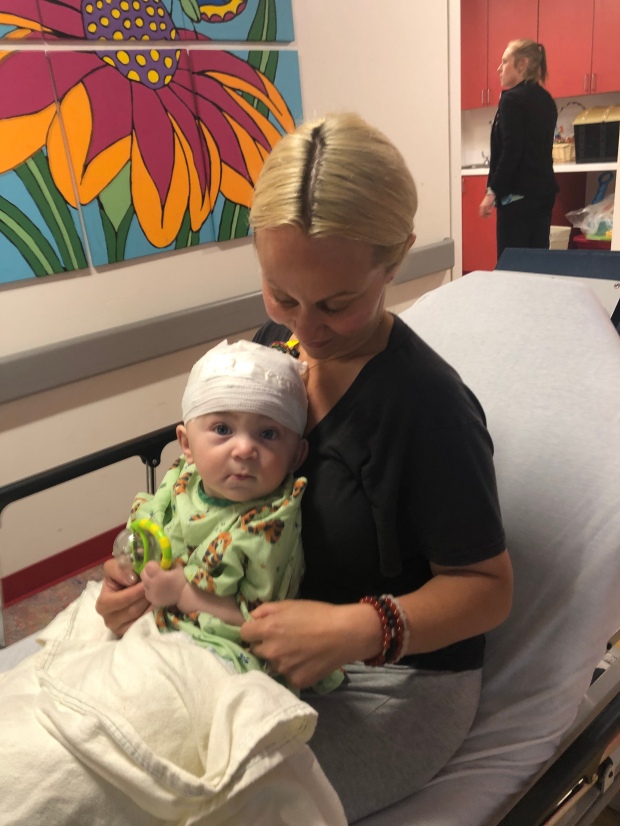 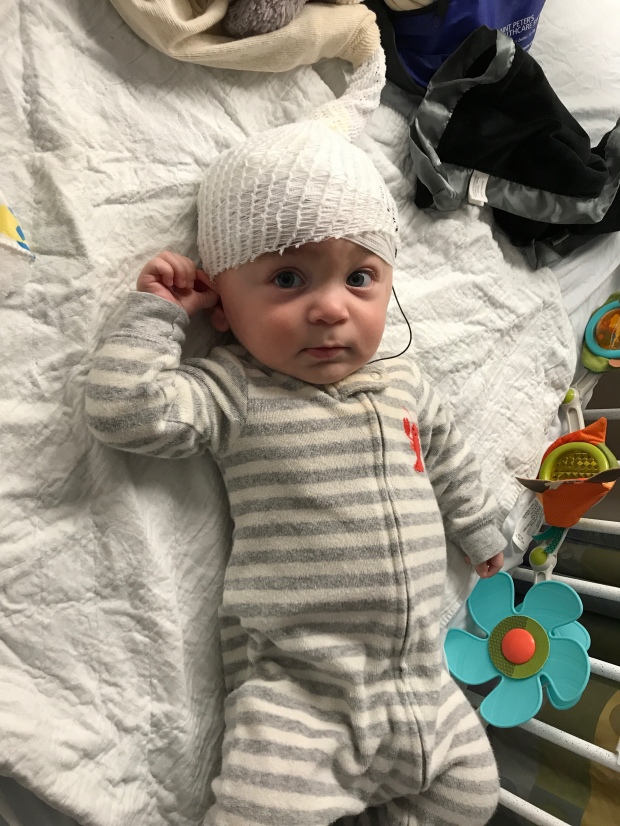 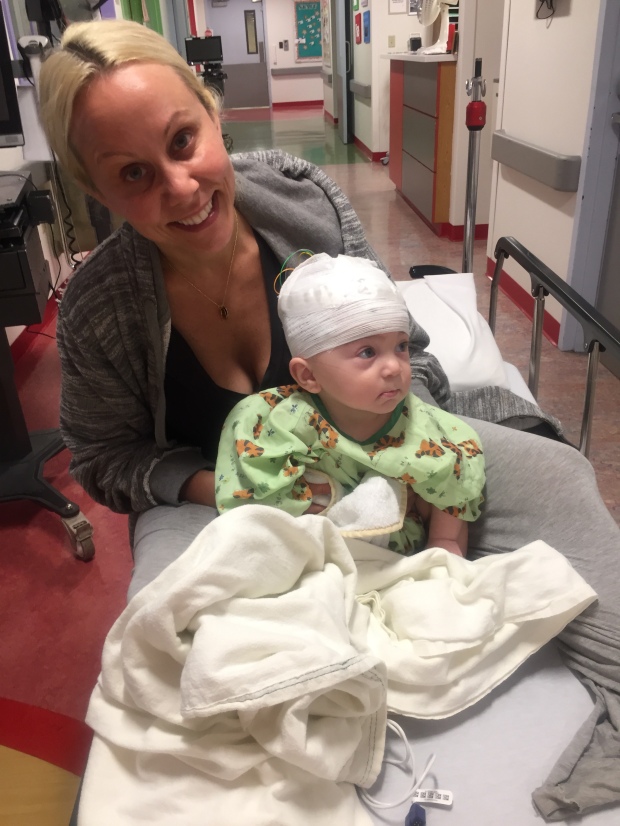 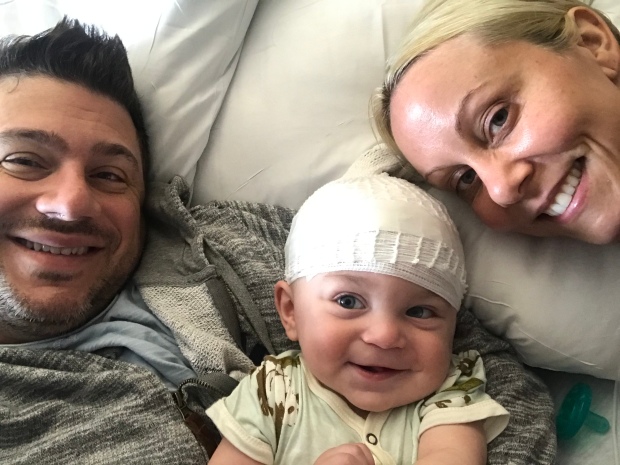 There is a saying,.. “Making the decision to have a child is momentous. It is to decide forever to have your heart go walking around outside your body.” ….their joy, happiness, sorrow.. you experience it all simultaneously with your baby.. your hearts beat as one. Any mother can tell you …their smile fills you with more happiness than your own.

..but unfortunately, at times life brings more .. there is also pain. When your child is suffering it is the most excruciating visceral feeling you can imagine….It’s so deep .. it’s unbearable. Words cannot do it justice.

For the past few days, my sweet Peter has been suffering. His brain has been sending abnormal signals to his body causing uncontrolled movements putting him at significant risk. The episodes are brief ..he cries and stiffens up for a few seconds. It doesn’t look like anything more than a little temper tantrum or “colic.”

The last few times he was on his belly.. his legs extended and his arms flexed….he was crying .. but he is learning to crawl.. it’s that what babies do when they learn to crawl? They kick out their legs?? They get frustrated .. they want to be held.. especially my Peter.. my snuggler.. he loves being held and is always a little resistant to prolonged tummy time. It can’t be anything bad.. he looks so good.. he’s getting so much better .. how could it be anything bad.

My mom was the first to notice it. She told me she saw him “acting a little funny” .. he “wasn’t himself for a few seconds”.. at the time he also had a cough and runny nose. I didn’t make much of it .. he was playful and eating .. everything seemed fine. The next day she said she saw it again.. it was quick and he was on his mat when his head went down and legs extended for a few seconds. Now I’m starting to get concerned, but other that, and his little cold, nothing seemed different. I called the neurologist and her nurse told me they will put in an order for an eeg to measure the electrical signals in the brain and mri to check the structure and she gave me the numbers to schedule the tests. I immediately called both numbers .. no one answered and I left messages. She didn’t want to bring me in and said the next appoint was months away. “Just try to get it on tape” she said over and over. His personality, eating and sleeping habits .. everything was all the same.. if they are not that worried I guess it must be ok?

The next day my mother said she saw it happen about 5 times.. now my mind starts running .. repeat episodes .. I feel sick and I’m scared. It’s starting to sound like something .. something very very bad. I sit by his side and watch his every movement.. and then I see it happen.. he’s playing and suddenly starts screaming and crying.. he stiffens like a board .. opposite extremities extended.. it lasts seconds .. the crying continues for about a minute but the actual stiffness is brief. Unless you are touching his muscles it is almost impossible to recognize what is going on. I am able to get it on tape. And just as fast as it came .. it went.. he was back to his normal self playing .. eating .. maybe spitting up a little more than usual.. maybe when I start to look back .. but he was also congested from his little cold. It can’t be .. it just can’t be…. it was late .. my plan was to call neuro again in the morning. How my mother picked up on this .. she told me “I know him .. something is going on. ” The only thing better than a mother’s instinct is a nana’s! Thank god for her.

We had an early therapy session that morning. I show our angel therapist who knows Peter since he came home from the NICU. She’s also very concerned but can’t tell much from the video. Watching it again with her it really looks like nothing. If they won’t see you sooner just go to the ER”, she suggested. I value her opinion. Call your pediatrician and just go! She educated me on the different types of seizures in babies and explained that even those brief little movements could be something very dangerous. We have our therapy session at home as usual and Peter is his normal self. There are no changes in his ability or tone.

Right after, I call to schedule the eeg again like I was advised to do by the neuro nurse. “We don’t have an order here for you”.. they said. Great no order .. so I can’t schedule.. “our next appointment is sometime late next week if you can get the order we can do it then” …ok .. Again, I call the neurologist and I get the nurse .. I sent the video .. she tells me they didn’t get it. I told the nurse no order was put in and she again told me she would take care of it and to just call and schedule. I couldn’t wait anymore.. day three of me calling .. the same concern my 28 weekers preemie may be having seizures.. ( but his eyes aren’t rolling back and it really doesn’t look like a seizure .. so it can’t be that bad right?) it’s getting worse I need to speak to the doctor now. Day three and I still haven’t spoke to his neurologist. Reluctantly she told me she would have her call me.

A few minutes later .. it’s our doctor. She’s concerned and suggested going directly to the emergency room. She told me she would call ahead and have neurology ready to admit us and do a three day video eeg monitor. They would check the electrical activity in his brain with the eeg and have a continuous video to compare the readings on the eeg with the actual body movements. She also suggested they would do the MRI of the brain to check for any structural abnormalities.

I bring my baby boy to be admitted to the hospital. Every single thing .. from the smells to the florescent lights brings back the horror of the NICU. I’m so afraid for my boy. I. D.o.n.t want to be here.

We are admitted.. he is brought to a room and tiny electrodes are glued to his head. It’s wrapped in a long stocking and connected to a fanny pack. He hates it. He is so uncomfortable. The camera follows him everywhere. I’m stuck between praying it happens so they can actually see what is going on and wishing I am just overacting and there is nothing at all. I make James stay home to watch the rest of our tribe. “I’m fine,” I keep telling him. He saw the video as well and thought it was nothing.

We got lucky the doctor on call was the head of the pediatric neurology department. I meet him and immediately have a sense of relief. “He looks too good..” I know I know I was thinking the same thing !! He looks so good it can’t be…

A few hours later the nurses change shift. The new nurse comes in to meet us and Peter starts to suddenly cry… it starts. He is crying.. he stiffens .. this time it’s worse and his eyes flicker.. I tape it .. I just want to make it stop .. the eeg and video is recording his every move… is it a seizure?? .. the nurse is not sure either.. I press the button .. they tell me to press a little red button any time I think there is an event to highlight it on the report. It’s quick and he’s back to himself. The nurse reassured me the doctor sees everything happening. Ok. No one else came in.. maybe it is really nothing? This was about 8:45.

He finally gets comfortable and falls asleep. It’s now 11pm. He’s in his crib doing his usual tossing and turning when a resident comes rushing in. “The Doctor is watching from home and said he’s having multiple seizures. He needs medication immediately to get them under control..” I call James.. I need you now. My mother stayed so James could leave. What is it ..what type ..what is happening, “the doctor will explain it to you in the morning..” she said .. “right now I have to give him this medicine to make them stop”. She continues to tell me in the morning he will need to be sedated to have an MRI. She answers all questions with the doctor will explain more in the morning. I just held him .. crying.. praying his brain is ok.. praying .. just praying the same prayer I have prayed over him 1000 times before.

The next thing I know James is with me. His presence immediately gives me some relief. I watch Peter’s every movement… holding on to the button and pressing it with every little twist and turn. Every cry .. can that be it.. is something happening .. it’s pure panic.

The next morning the doctor comes in and explains Peter has epilepsy. His brain is sending abnormal signals. We sedate him for the MRI and the results come back almost immediately… normal .. “that’s what you want”… the doctor tells us .. “the best situation is having no reason at all….if you find a reason it’s usually a much worse prognosis. ”

No reason.. none. His brain is normal.. they just happened out of no where… it’s almost impossible for me to accept. The why’s and how’s just keep circling.

His plan is to monitor him on his new medication and as long as there is no seizure activity we go home. You can live your life as you usually do, he said .. no restrictions at all.

After a few days, here we are.. home. It seems that the medication stopped the seizures. His eeg has been normal and we will just continue this medicine. It’s almost like a bad dream. There is even some hope that in a few years, as long as he remains seizure free, we may be able to stop it. Please make them stop.

I’m so worried about my beautiful son.. I do not want to take my eyes off him. The doctor reassured us that his prognosis is as good as it could be. He has no signs of cognitive delay and no signs of brain damage on any of the imaging. God please make it stay this way. You are so incredible and so strong my perfect son.

I feel you my precious boy…. not only your struggles .. I feel your love and strength . I am so proud of you … my heart and yours are forever entwined ..a reason to hold you even closer now

… it’s ironic how you need sadness to know happiness.. noise to appreciate silence and absence to value presence..

We will not take a single moment for granted .. you are our gift… our miracle.. our greatest decision.

6 thoughts on “My Heart”